In the early 1960s Warren Middleton (SK), W4DYE (later W8CXD) and George Rose (SK), W4GCE, employees of GE's Communications Department in Lynchburg collaborated on the construction of an elaborate Amateur Radio remote station, with repeater capability, located at the GE site on Candlers Mountain just east of the Mountain Road plant. These hams plus one other, who I cannot recall, were the station control operators.

The station had capability on 6Meters, 2 Meters, and 3/4 Meters with control on 3/4 Meters. A five function Secode selector followed by a stepping switch and a bank of relays provided for multiple modes of operation.  In the 2 Meter repeater mode the station received on 146.34 Mhz and transmitted on 196.94 MHz. It probably was the first repeater in the country to use these frequencies which several GE hams, including these two, were then actively promoting to hams nationwide as the first activated frequency pair for 2 Meter FM repeaters. More about this aspect of ham radio history is here. 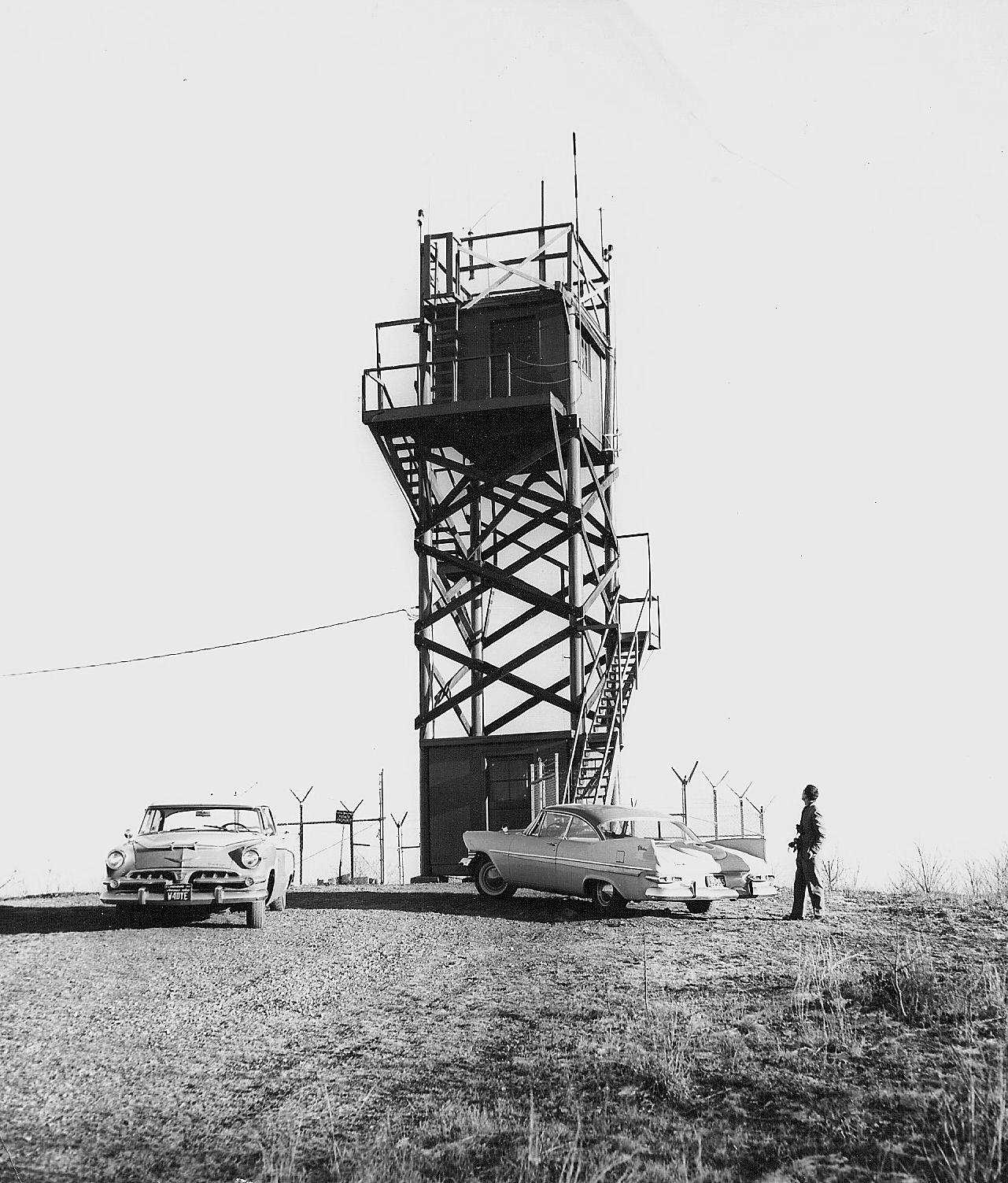 The Candlers Mt. Site. The car on the left has Warren's W4DYE license plate. I believe the man is Harry Welch (SK), K4MKO who was manager of GE's Factory Modernized Radio operation. 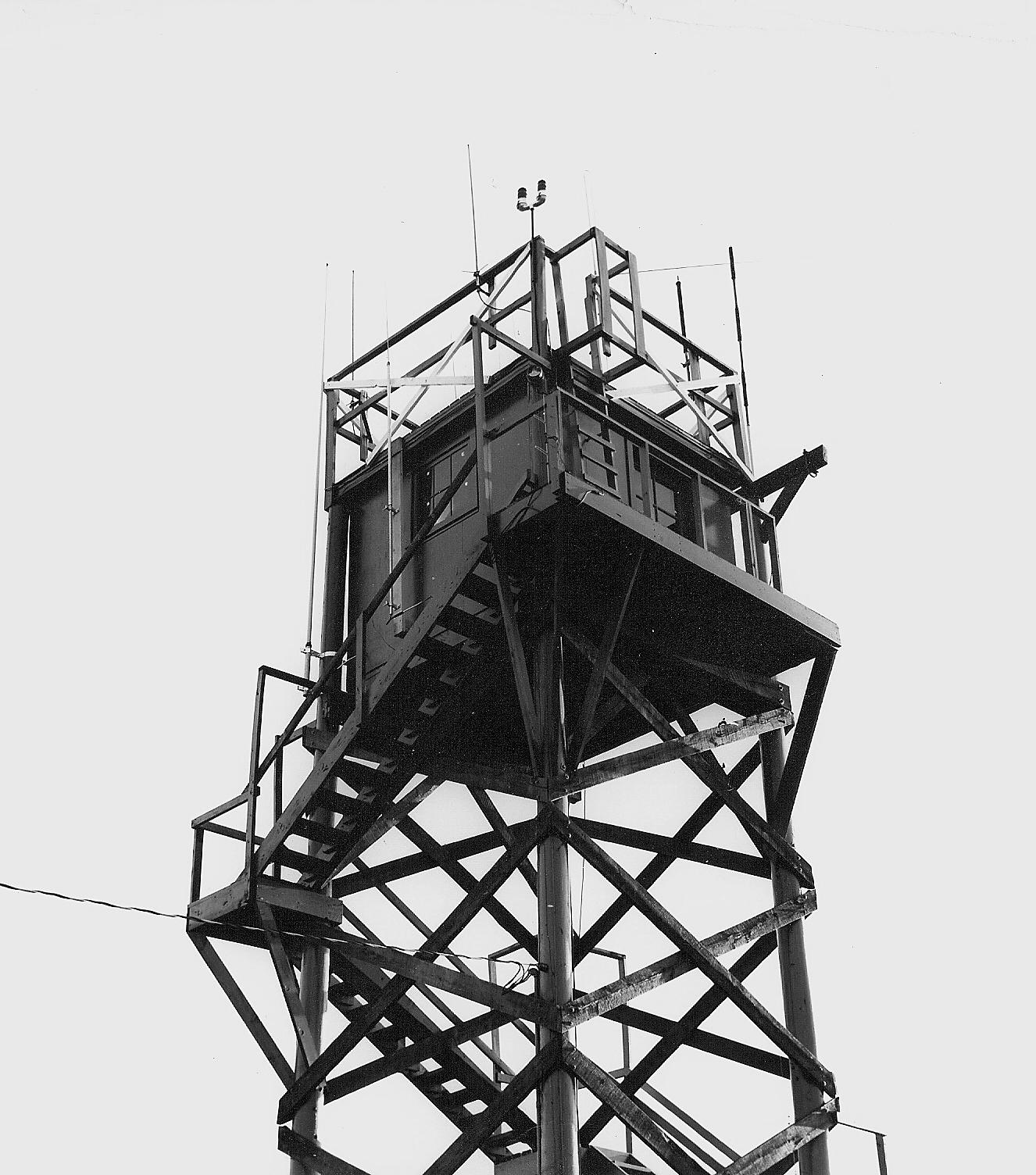 Top of the structure. Quite a view from up there. 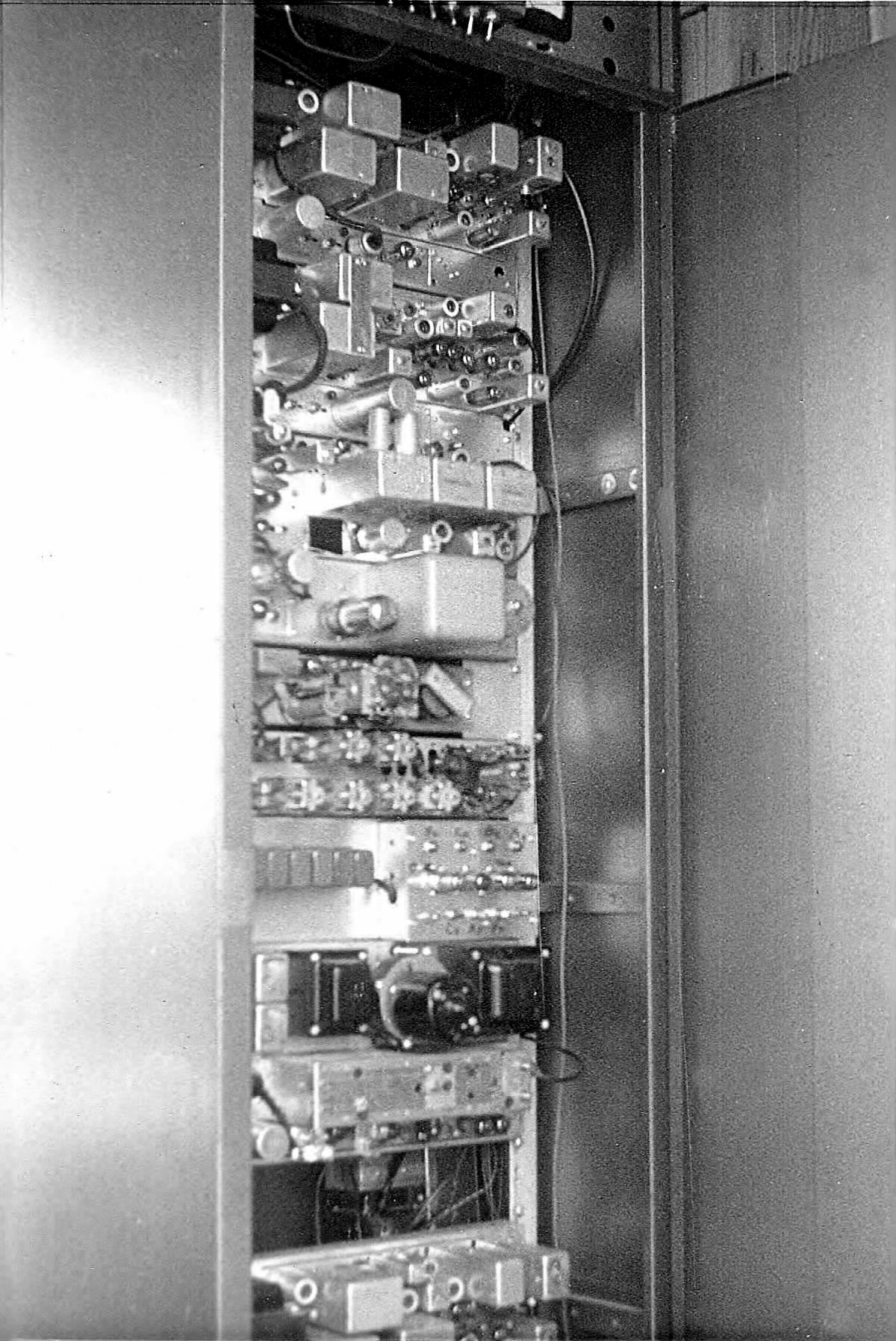 Front of the station cabinet with most of the gear (mostly Progress Line) showing. 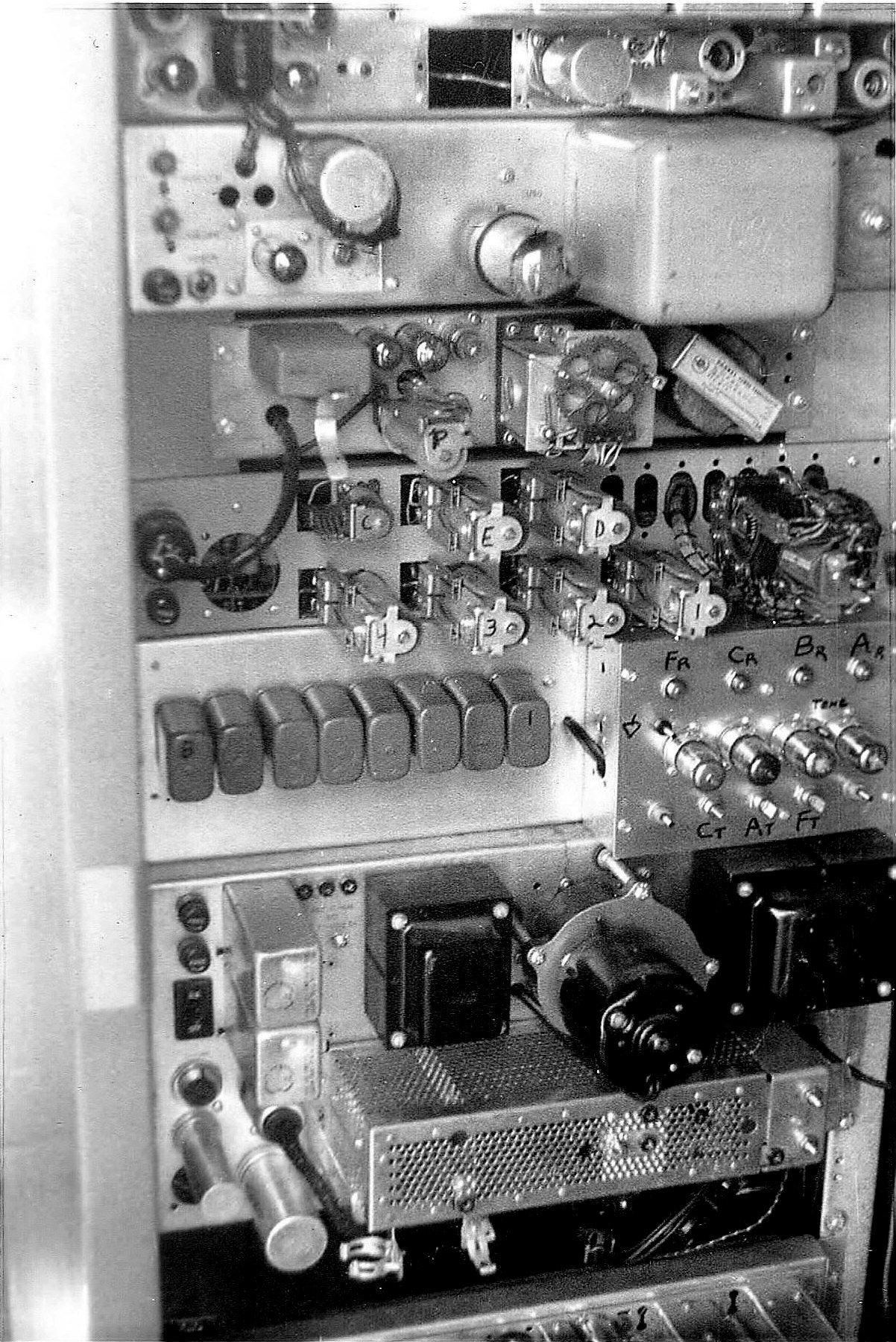 Closeup of the control gear. The Secode 49HS selector (toothed wheel) is on the panel with extender ears. Immediately below the wheel is its 5 function connector block. The panel below it has a bank of open-frame relays with the stepping switch on the right.  On the left of the next panel, just above the 3/4 Meter transmitter, is a bank of  8 gray units which may be the 24 Volt GE RR3 latching relays which I know were part of the station control apparatus. The RR3s were sold as a lighting control device.

Station cabinet rear view - Somewhat of a rat's nest, but it sure did work 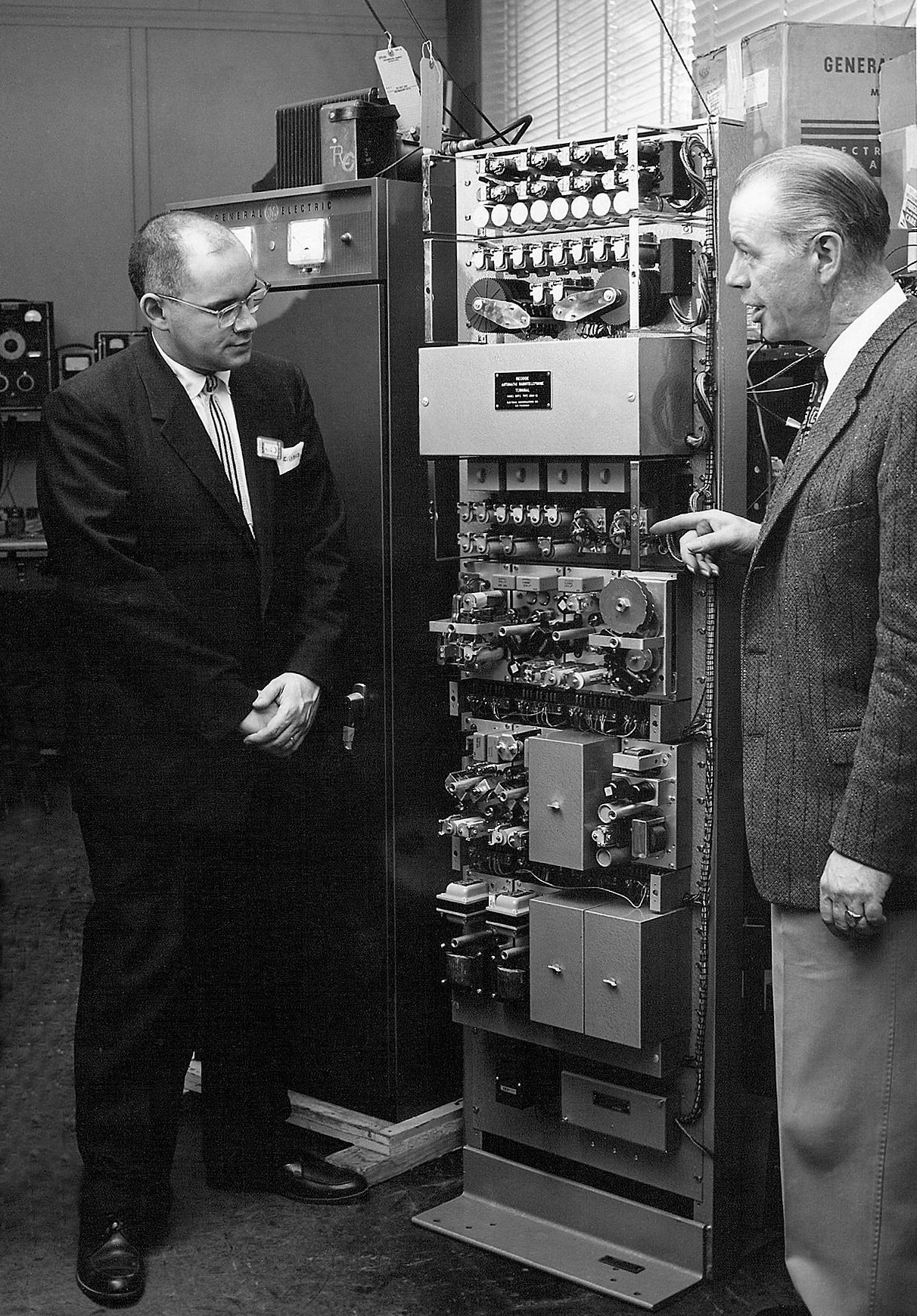 Warren Middleton (on the left) with a new mobile telephone terminal being installed at
Delcambre, LA. (Late 1960s?) I don't remember the name of the GE employee on the right. 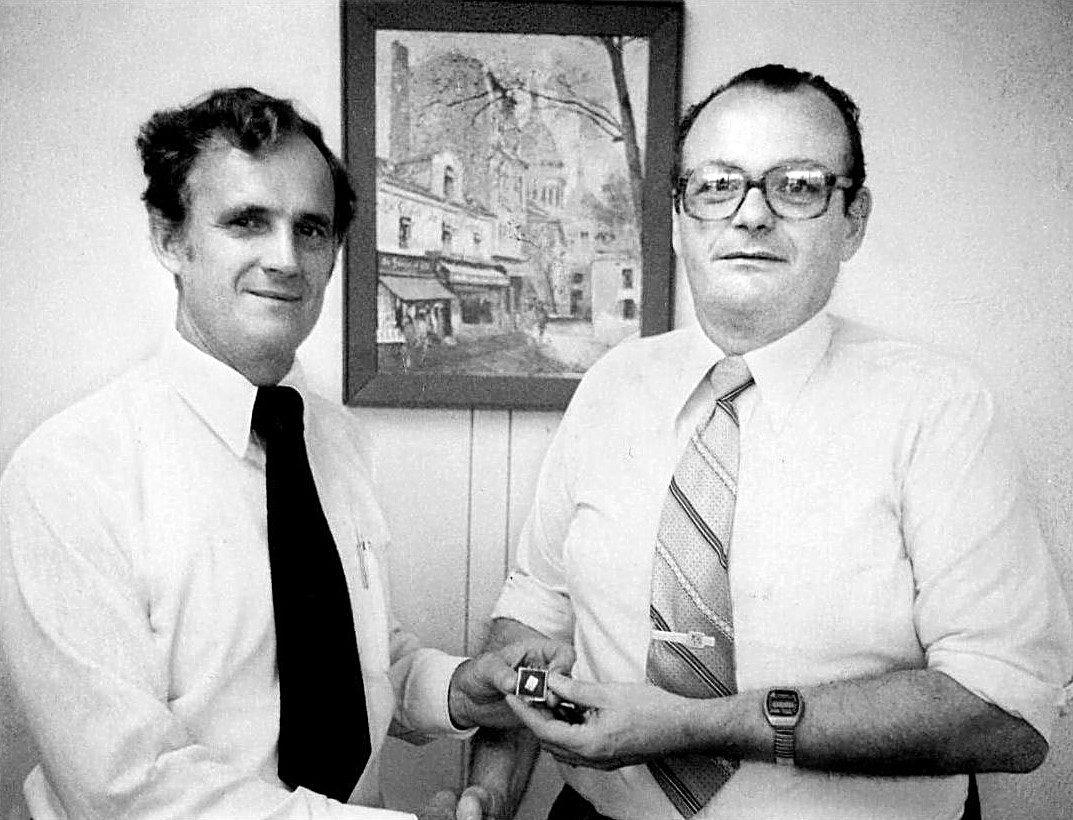 George Rose on the right with Fred Mann. Photo from Welford Jones' collection.